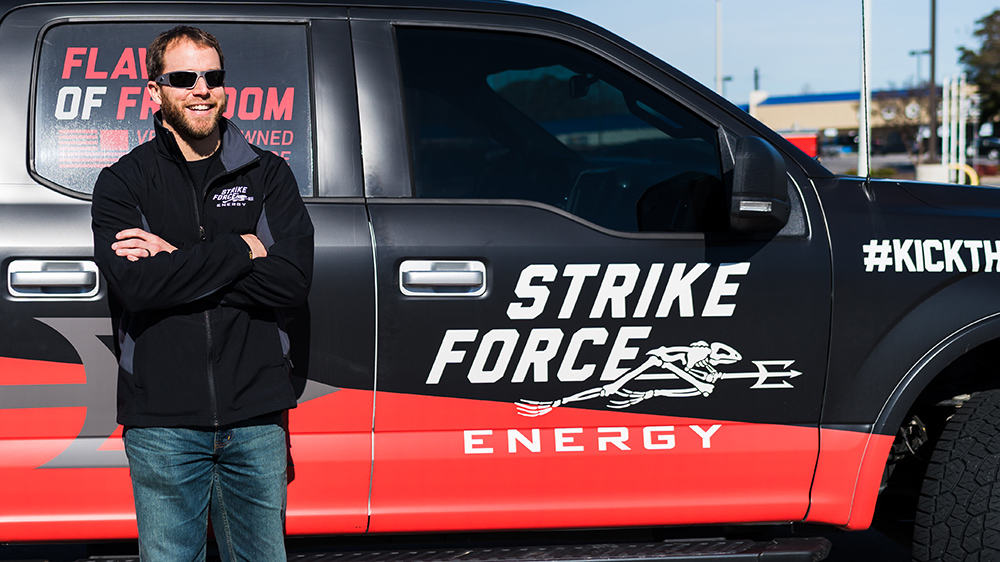 If you’re like most of the American population, you find yourself impulsively reaching for a cup of coffee each morning in hopes of feeling alert, energized and overall more prepared for the day ahead. That first sip that hits your tongue is potent; you suddenly feel emboldened, and you’re ready to face any obstacles in your way. But by the afternoon, you find yourself feeling the complete opposite. Drained, groggy and tired, you reach for another cup, usually double the size of the one consumed in the morning, all to ward off the inevitable crash that coffee makes you feel as it wanes. The mentality of “just one more cup” is a habit that’s hard to quit, but Sean Matson ’05 has the cure that can finally cease the endless cycle.

Strike Force Energy, cofounded by former Navy SEAL Sean Matson ’05, is a clear liquid energy supplement comprised of only four intricately selected primary flavors: original, lemon, grape and orange. Using as little or as much as one wants from each individual packet, the consumer has the ability to manipulate their water – or a multitude of other beverages – to taste like any combination of the four flavors, all while increasing their daily water intake and skyrocketing their energy.

When asked how the idea for Strike Force came about, Matson explained, “I have another company called Matbock,” which designs equipment that is lighter and more efficient for soldiers in theatre. “[Through Matbock,] we were working with a gentleman, Bruce Schlee, who is [now] the chief executive officer of Strike Force, and we were working with him on a robot. The idea for Strike Force came from him, actually; he had one or two samples of it [with him], and he realized it might be something that I’d like to develop with my background in the military.” After trying a sample, Matson attempted to focus on the initial conversation about the development of the robot but found himself so intrigued by the packet of energy supplement that, at the end of the meeting, he asked to be a part of its development. “I went out a couple of weeks later, took some of those samples that Bruce gave me and got a purchase order for about 10,000 packets worth. [Then] we realized we didn’t even have a company [established] yet,” Matson joked.

The pair quickly launched into creating the brand and meeting the instant demand from consumers. From the very beginning, innovative and disruptive technology – a common theme of Matbock and its mission – transferred to their work with Strike Force. “When you look at Coca-Cola, Pepsi, Gatorade, Red Bull, Monster or anything else, you’re talking about 16-ounce cans with only about 6 milliliters of chemistry in it – everything else is just water. Anybody in logistics knows it’s not very profitable to ship water, so we looked at our product and said, ‘Let’s make a healthier alternative [energy supplement] for consumers that allows them to create their own.’ You know, millennials love the ability to create their own.” He further highlighted how beverage companies invest millions of dollars into understanding the market and what the consumer wants. “That’s why, when you go into a fast food restaurant, there’s a million-selection fountain soda machine … but again, the consumer wants the ability to mix and choose, and from a distribution side or a store-owner side, there’s limited space for supply, and they can’t keep every flavor in stock.” That’s where not only the convenience of Strike Force comes in but also the company’s unique insight on its customer demographic. “There are so many options with our four primary flavors to create something unique. You can mix it in tea, water, etc., and you’ve essentially created your own beverage.”

With such negative opinions surrounding energy drinks, Matson understands that providing a healthier but still effective substitute to the name-brand drinks was vital in launching a truly great product. “We are converting a lot of customers from energy drinks or some of the other instant powder energy drinks. We have a 67 percent customer retention rate right now, which is unheard of for a startup [company].” Being such a difficult market to penetrate – think of how established brand name energy drinks are – the customer retention speaks to the simple science within each packet. Disregarding unnecessary additives and ingredients, Strike Force holds strong with just the basics. Each packet provides the customer with 100 percent of the daily intake value of vitamins B6 and B12. Aside from that, there’s not much else besides caffeine. Using so few ingredients has its purpose. As Matson explained, “A nutritionist taught me that, when looking at the label, the [fewer] amount of ingredients, the better it is for you. If it’s butter, and the label just says butter on it – well, guess what? That’s the best you can get. It might be loaded with fat, but that’s when you use portion control. But it’s healthier for you than the artificial butter that contains chemicals you’ve never heard of or can’t even pronounce.”

Matson also believes in transparency, and Strike Force is founded on the same principal. That’s why, when looking into the product development, he admits there’s only one aspect that the brand eventually hopes to find an alternate ingredient for. Strike Force Energy believes in the best possible compilation of ingredients for its consumers, which translates to continually progressing the actual science behind their brand. “We use Sucralose as our artificial sweetener, where other brands use Acesulfame, which has a lot more issues and negativity associated with it. Now, we’ve tried to create something that has a more organic sweetener,” Matson admitted, “but the issue we’ve run into is that caffeine is so bitter, we can’t use anything other than Sucralose, because it won’t mask that caffeine. You’d just taste straight, bitter coffee. But Sucralose is still a much healthier alternative.”

Another way Strike Force invests in their consumers is philanthropic in nature. Each week, after pulling from a running list of APO addresses provided to them from community members, the company picks a recipient to send a care package to. Each box is created with the soldier in mind – things that they need, want and will enjoy. “We don’t just send them our stuff, because we’ve been deployed – I did five deployments in my 10 years – and we just said this is another way to give back to our community … because we do care about them, and I think that’s something consumers these days are looking for. They want to know what your social impact is,” he elaborated. Aside from the care packages for the military, Strike Force also takes care of first responders and law enforcement. “I would say that I’ve always had that feeling and appreciation for giving back because of how I was raised, and I would venture to say that most people who go to VMI probably feel the same way,” Matson stated. The honest attitude that the company exudes resonates in their transactions with other businesses. “A lot of our business deals are done over the phone. And I tell them, look, I couldn’t really care less if we sign an agreement or not, because what I’m telling you is what you’re going to get, and I trust that you’re going to be the same way with me. If not, you’re not going to do business with me. Period,” explained Matson.

Going into the third year of business, the product is now undergoing a nationwide rollout with 7/11 convenience stores. “A typical company takes three to five weeks to get through the system, and it only took us four days,” Matson explained. “The chief executive officer of 7/11 is a West Point graduate, so we’ll forgive him for that, but he believes in veteran-owned companies and believes in our product.”

Just like the energy it produces, Strike Force ceases to quit. By February 2018, the product had pushed past the borders of Virginia and made its way to North Carolina and South Carolina. By the summer time, Matson fully anticipations the product being available in 7/11 stores from New Jersey all the way down the East Coast to Miami, Florida.

Looking into the future, Matson insists that before venturing into new product territory for the brand, they want to make sure that they really hone the market. “The philosophy we came into this with was that we didn’t want to release anything unless we were 100 percent sure we could sustain the fulfillment and customer service side of this business. If we can produce a good product and are able to get it to the customer in a timely manner and also have a great customer support side where we can give them immediate responses to inquiries, then we knew this business would grow.” Although they understand the impatience of the market – when a consumer wants a product, they want it right away – Matson refuses to waver under the pressure. “We won’t introduce anything until we have the structure to handle it,” he insisted. In the meantime, those eager consumers have full access to the company’s broad range of current products online. If you wish to learn more about Strike Force Energy and take part in its mission, please visit www.strikeforceenergy.com.